“A masterwork of a memoir . . . beautiful, wise and full of heart.” 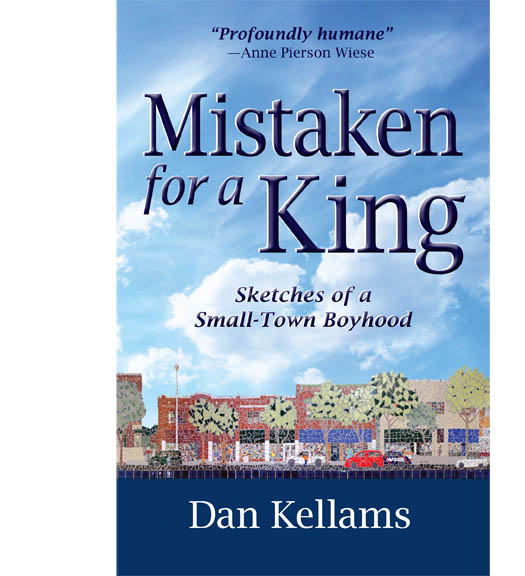 Tales of small towns, colorful characters and memoirs of growing up in a simpler time are not uncommon. Nostalgia is a powerful beast. What is exceedingly rare is to tell such stories without excessive sentimentality, languished descriptions colored by wispy memory, or endless diatribes on how much better things “used to be.”

In “Mistaken for a King: Sketches of a Small-Town Boyhood,” Dan Kellams manages to not only avoid the same-old take on a small town childhood in his self-published tome; he uses his massive talent to build a set of subtle, lyrical essays that are beautiful, wise and full of heart. The small Iowa town of Marion should be justifiably proud of their native son and this shining book.

Each chapter of “Mistaken for a King: Sketches of a Small-Town Boyhood” reproduces scenes from the author’s childhood in the middle of the 20th century in Marion. These vignettes are often startlingly vivid and frequently seem almost unfinished. As he states in the introduction, “A guy can’t remember everything, and the rules I set for myself in writing this book don’t allow me to make things up.” So much like the nature of memory itself, each passage is not a full story, but a glimpse into an era that has passed. It may be familiar to some, completely foreign to many, but regardless of your reference point, Kellams makes it seem real.

A ‘shocking’ degree of freedom

Children in the 1940s, especially those in rural areas, had to find their own recreation (before television entered every home) and most of the tales told in the book revolve around such adventures. Kellams, his younger brother and his friends roamed the town, making their own amusements, getting into petty trouble and learning to grow up. With a freedom many would find shocking today, the boys could be found in alleyways, in the fields playing ball, on rooftops, exploring and living and learning in ways children today would never be allowed to do.

In sometimes intensely personal stories, the author describes growing up as a sensitive, shy boy in a town full of characters. The stoic, supportive and industrious parents who devoted their lives to their sons; the rough and tumble schoolmates with surprising depths; his beloved pets;  his heroes and bullies; the local popcorn seller; the teachers who shaped him; family, friends and so many others.

While the dry wit and detached nature of his retellings lend some distance to the memories, there are plenty of moments throughout the book that reveal the author’s depth of feeling, such as his first experiences with formal work, as a paper boy for the Cedar Rapids Gazette: “The smell of Fred Ross’s cigar was the dominant odor, but it mixed with the bitter smell of wet, the woody scent of damp paper, and the mingled stench the rose from the jumble of our two dozen bodies . . . it was part of the romance of journalism.”

Several chapters discuss his parents in stark detail, such as using their first names rather than “Mom” and “Dad.” The memories are nevertheless told with obvious reverence, respect and love. Like many who grew up in the Great Depression, his parents were frugal and hard-working, but Kellams makes it clear with his beautiful prose just how loved he and his brother were, even though they never said it aloud. In a short epilogue, the author sums up many of the stories he began throughout the book, but none is more powerful than that of his parents. In simple terms, he reviews the end of their lives with a grace and humanity that is almost musical.

The unadorned language the author uses to describe the people and moments throughout the book make each moment powerfully clear and often they deeply resonate with the reader. Honest, unflinching and terrifically human, this is a masterwork of a memoir. It is a truly artful collection of stories and is very much worth the read, whether you grew up in a small town or not.

This review appears in the July-August 2017 issue of the Iowa History Journal (Titles and subtitles added.)